In this report, Arinze Chijioke takes a look at how skyrocketing prices of cooking Gas is increasing the dependence on firewood, leading to deforestation.

This January, Chinasa Sunday wheeled logs of wood into her family compound in Isiagu, one of the communities in Enugu State. As soon as she got home and unpacked the wood, she called a young man who would always help her break them into smaller sizes to make it easier for her to prepare meals.

Weeks earlier, she had gone to farmland, just behind her family house, where she cut down tree branches, brought them home and packed them on a spot close to the kitchen.

On days when she cannot go in search of firewood, she buys from those who sell.

“I don’t want to run out of firewood,” she said. “When it begins to go down, I quickly find where to fetch more”. 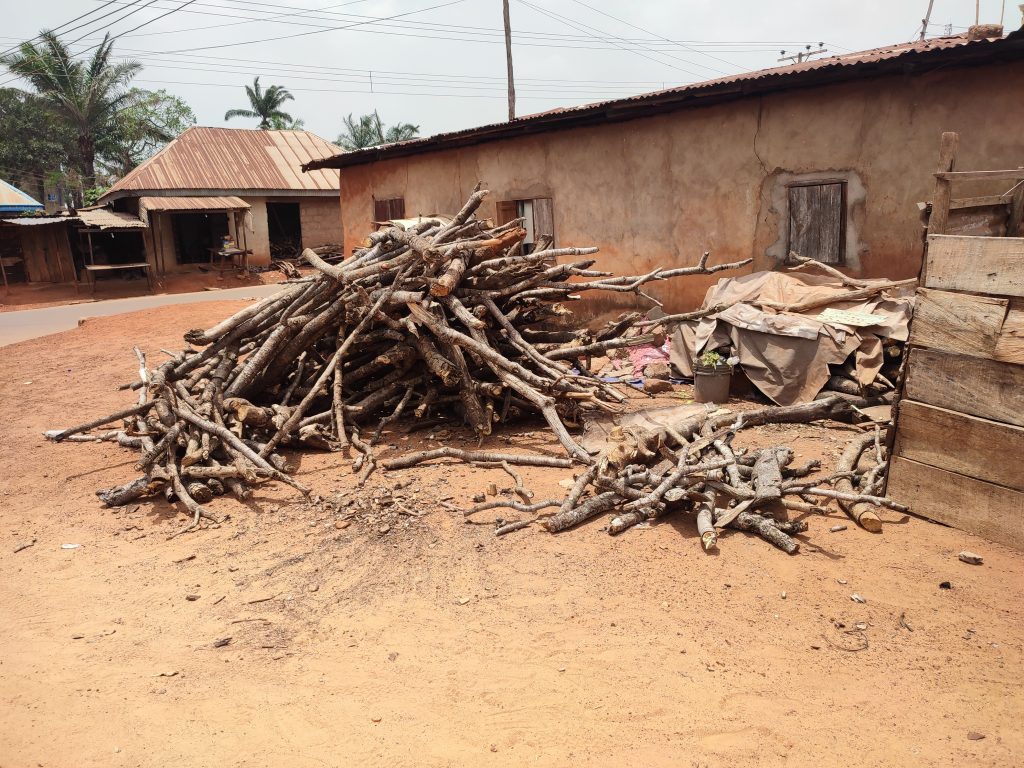 Sunday and her family are just one out of millions of Nigerians who have returned to the use of fuelwood for domestic cooking following the consistent increase in cooking gas prices, a development which is increasing the deforestation rate linked to erosion, drought, flooding and desertification.

Before the increases, Sunday was alternating between gas and fuelwood. But now, she only brings out her gas cylinder when she feels a need to clean up, after which she takes it back into her room where it has been for the past year.

“I was not buying much when the price was low,” she said. “Now that it has gone up, I don’t know why I should buy it when I can easily get firewood and cook whatever meal I want”. 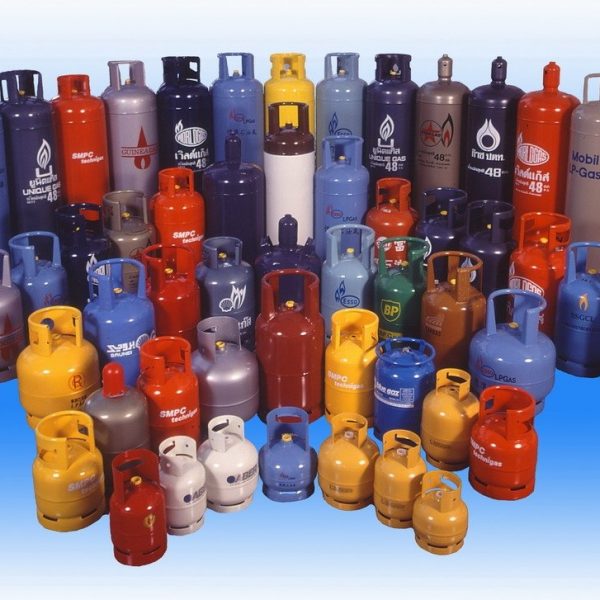 She knows too well about the health implications of cooking with firewood. But she cannot stop depending on it.

The use of open fires and solid fuels for cooking remains one of the world’s most pressing health and environmental problems, directly impacting close to half the world’s population and causing nearly four million premature deaths each year, according to data from the Global Alliance for Clean Cookstoves, a public-private partnership that seeks to promote clean and efficient household cooking solutions.

A 2014 study on domestic energy usage patterns of households in selected urban and rural communities of Enugu State also estimates that Nigeria consumes over 50 million metric tons of firewood annually, a rate which exceeds afforestation efforts. 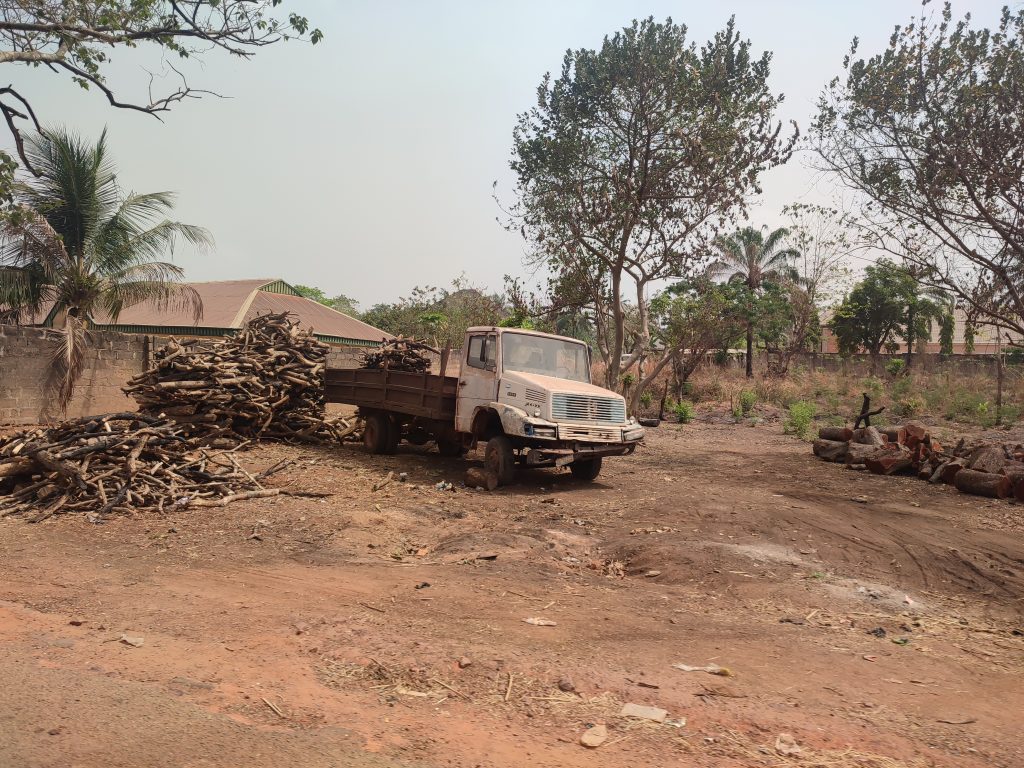 Logs of wood loaded into a truck in Enugu

This is even as Revised deforestation figures from the Food and Agriculture Organization of the United Nations (FAO) show that Nigeria had the world’s highest deforestation rate of primary forests in 2005.

Between 2000 and 2005, Nigeria lost as much as 55.7 per cent of its primary forests — defined as forests with no visible signs of past or present human activities, with the collection of fuelwoods cited as one of the leading causes of a forest clearing in the West African country.

In Isiagu, Sunday’s community, fuelwood has become a serious business for many families. While some of them convert tree trunks into charcoal, others break them into smaller sizes which are arranged and sold for N500 and 1,000, depending on the size. A paint bucket of charcoal goes for at least N200.

Data from the United Nations on climate change shows that the smoke from cooking fires accounts for eight deaths every minute globally, impacting mostly women and children.

In Nigeria- and other developing countries- health problems arising from smoke inhalation, including respiratory infections, eye damage, heart and lung disease, and lung cancer, have been discovered to be responsible for many premature and preventable deaths annually.

Reports by the World Health Organization and the International Centre for Energy, Environment and Development (ICEED), estimate that as many as  95,000 Nigerians die annually as a result of smoke inhaled while cooking with firewood.

Smoke inhaled while cooking with firewood has also been proven to be the fourth leading cause of death in the world after heart and lung disease, and respiratory infection, with women and children under five worst hit. The WHO report shows that if a woman inhales smoke while cooking breakfast, lunch and dinner, it is equivalent to smoking between three and 20 packets of cigarettes a day.

Dr Nnaji Chibueze of the Centre for Energy Research and Development at the University of Nigeria, Nsukka says that biomass fuel use has been found to be associated with cataracts, low birth weight in babies of exposed expectant mothers and women who trek up to 7-9 kilometres to source for plenty of firewood, thereby increasing their stress levels in doing other house chores.

Despite sitting on a huge resource base of gas, currently hovering around 206 trillion standard cubic feet, Nigeria depends on the US and other African countries such as Algeria and Equatorial Guinea for the importation of Liquefied Petroleum Gas (LPG).

The rate keeps soaring because it is determined by the fluctuations in the dollar to naira rate. This means that the more the naira is devalued, the higher the prices will be. 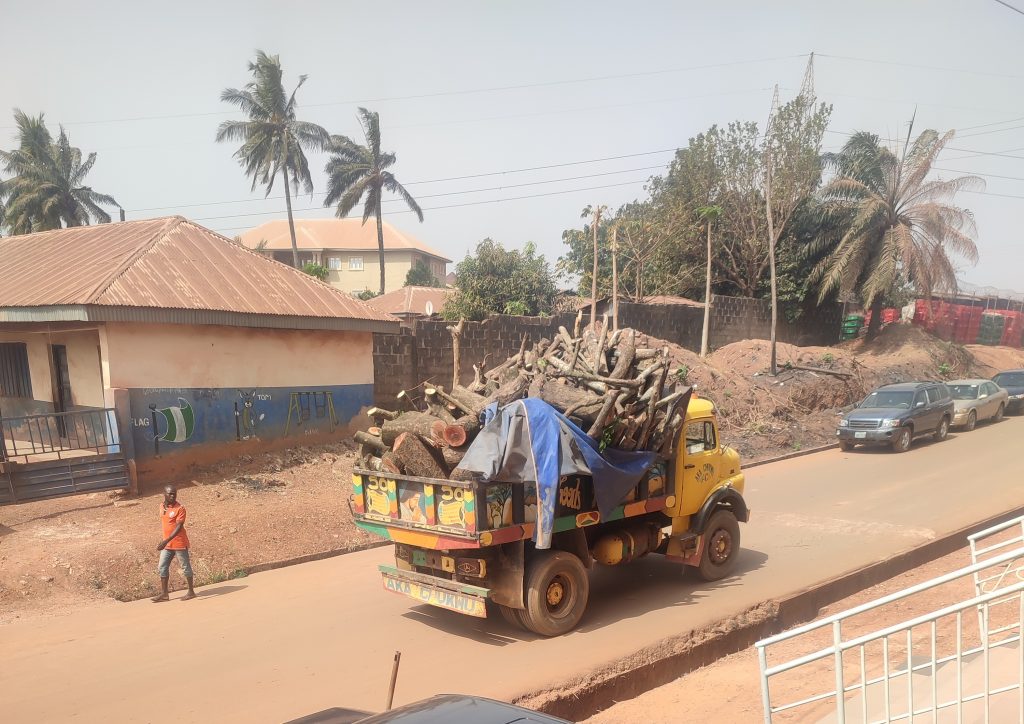 A tipper conveys logs of wood in a community in Enugu

In September 2021, Executive Secretary, Petroleum Products Pricing Regulatory Agency (PPPRA), Abdulkadir Saidu, disclosed in a report that 85, 264.803 metric tonnes of cooking gas were supplied across the country in August 2021.

While deficits in terms of infrastructure have kept production at a low level, economic indexes, especially high inflation, naira devaluation and unsteady exchange rate continue to send the prices of cooking above the reach of the poor who live on less than one dollar a day.

Like the PPPRA, the Nigerian Association of Liquefied Petroleum Gas Marketers (NALPGAM), in October 2021, attributed the rise in the price of LPG to inadequate supply of the product into the domestic market and the Federal Government’s re-imposition of Value Added Tax (VAT) on imported LPG.

NALPGAM’s Executive Secretary, Bassey Essien, in an interview in Lagos, said that the supply of LPG had fallen below the demand, adding that the current consumption level is over 1,000,000 metric tons, but that the quantity available locally is in the range of 450,000M

“The first issue to address is how we can ensure there is constant availability of cooking gas in the country,” Essien said.  “The cumulative domestic supply accounted for 40 per cent while the balance 60 per cent was imported”.

He also noted that the proposed reintroduction of VAT at 7.5 per cent and customs duties applicable, which are to be applied retrospectively, would worsen the price.

At the Nigeria International Petroleum Summit which was held In June 2021 in Abuja, the Department of Petroleum Resources (DPR) said that the Proven gas deposits in Nigeria have moved up 206.53 trillion cubic feet.

Director of DPR, Auwalu Sarki disclosed that indigenous oil and gas companies are now contributing as much as 33 per cent to the nation’s crude oil reserves and about 30 per cent of gas reserves. 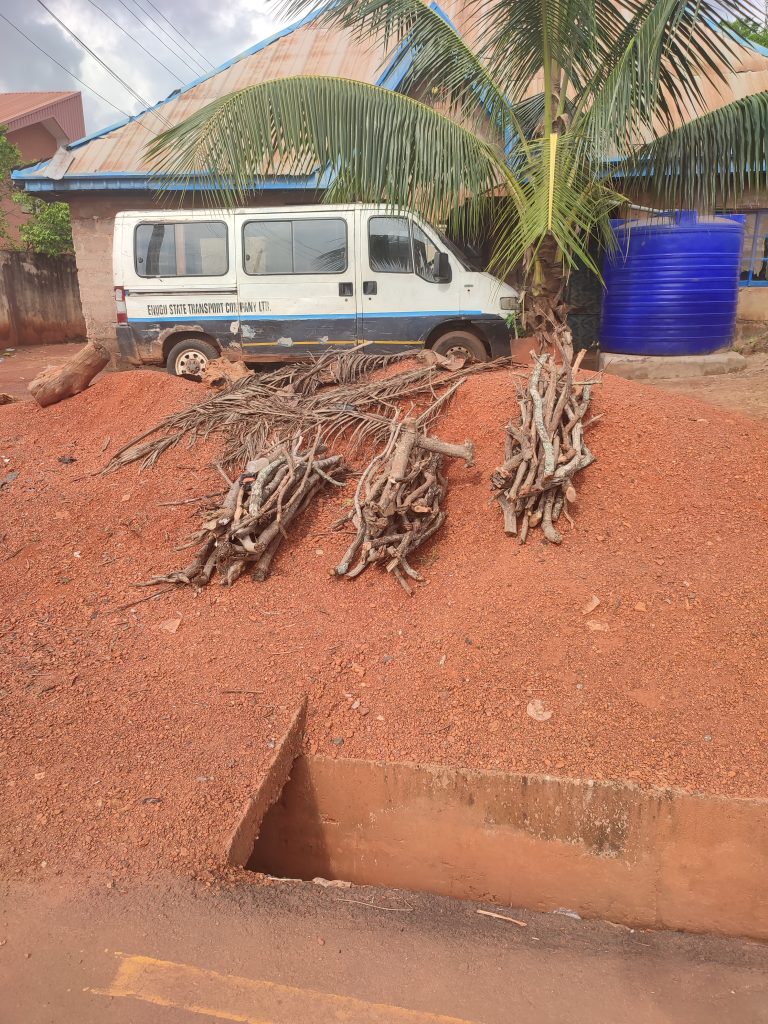 Speaking on the gas reserves, Auwalu attributed the growth to recent efforts being made on gas exploration in the country, especially the “Decade of Gas Initiative’.

The Nigerian government had in 2020, put Nigeria’s total gas reserves at 203.16 trillion cubic feet (TCF), representing a marginal increase of 1.16tcf or 0.57 per cent from the 202tcf recorded in 2019. The recent increase implies growth of over 3 trillion.

“Nigeria attained the target of 200tcf of natural gas reserves by the Reserve Declaration as at Jan.1, 2019, before the 2020 target,”. “Thereafter, the government set a target to attain a Reserve Position of 2020tcf by 2030,” Auwalu said.

He noted that independent companies are driving value addition to gas, adding that acquisition of divested assets, as well as accelerated appraisal and development efforts, are other driving factors.

To him, the country is already gaining from the deliberate national efforts to boost indigenous participation in the sector.

The question, however, remains what the impact on the average consumer is. As many Nigerians have argued, the reserves must translate to more availability at affordable prices.

Like Sunday, Others do not care about health implications

Before the price of cooking gas went up, Helen Onu was using fuelwood to prepare meals. Although the heat coming out from her three-stoned open cooking fire usually leaves her wheezing badly from firewood smoke, Onu does not care.

She has a gas cylinder she fills from time to time. But after she heard that the price of gas had increased, she decided to completely depend on fuelwood for her daily cooking.

She knows too well about the many health implications inherent in cooking with fuelwood. But she cannot stop using it for her cooking. 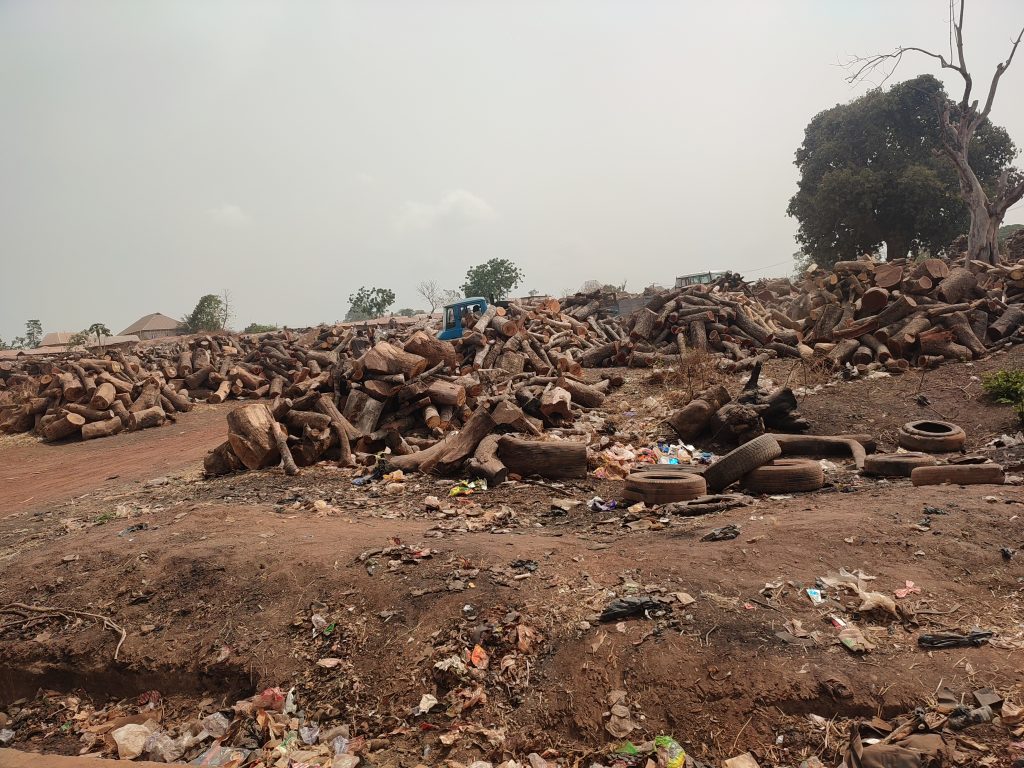 Logs of wood arranged for sell in Enugu

To deal with the stress of having to trek long distances in search of fuelwood, however, she gets in touch with motorcycle owners and commercial bus drivers who help her buy in large quantities and bring them to her house.

Now she has a location close to her kitchen where she packs her logs of wood covered with sacks to prevent rain from beating them.

“When I buy it in large quantity, it takes months before it finishes”, she said, pointing in the direction where she arranges her fuelwood. “I hardly run out of it”.

Beyond its health implications, when fossil fuels are burned for energy, they release huge amounts of carbon dioxide into the air, thereby intensifying the greenhouse effect.

The United Nations on Tuesday, October 19, 2021, warned that more than 100 million “extremely poor” people across Africa were threatened by accelerating climate change that could also melt away the continent’s few glaciers within two decades.

In the report, it was estimated that “by 2030, up to 118 million extremely poor people will be exposed to drought, floods and extreme heat in Africa, if adequate response measures are not put in place”

Commissioner for rural economy and agriculture at the African Union Commission, Josefa Leonel Correia Sacko, said that in sub-Saharan Africa, climate change could further lower gross domestic product by up to 3 per cent by 2050.

“Not only are physical conditions getting worse, but also the number of people being affected is increasing,” she said in the report’s foreword.

In January 2022, the Nigerian government announced that it was ramping up measures to ensure a drastic reduction in the cost of cooking gas.

General Manager, external relations and sustainable development for the Nigeria Liquefied Natural Gas (NLNG), Andy Odeh, in a statement said the company would supply 100 per cent of its liquefied petroleum gas (LPG) to the Nigerian market. 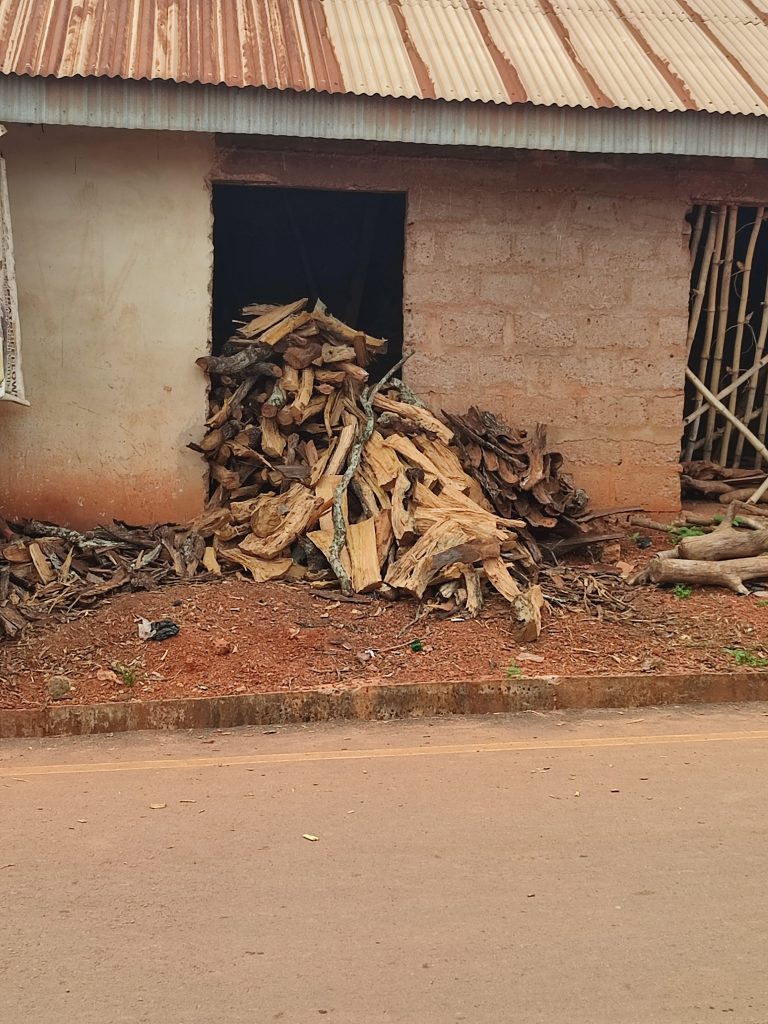 Logs of woods in a community in Enugu

Odeh was quoted as saying that the NLNG had developed a scheme to sustainably supply propane for usage in cooking gas blending as well as in Agro Allied, Autogas, power and petrochemical sectors of the Nigerian economy.

Chibueze says that the government must improve access to cheaper alternative energy sources for cooking if the challenge of over-dependence on fuelwood must be addressed.

“Availability of woodlots and access to alternative, affordable, renewable energy systems would reduce the pressure on the forests and the amount of time and efforts women devote to obtaining fuel wood,” he said.

At the COP26 climate talks in Glasgow, more than 100 countries pledged to halt and reverse forest loss and land degradation by the end of 2030. A joint statement backed by the leaders of countries including Brazil, Russia, Indonesia and the Democratic Republic of the Congo, which collectively account for 85 per cent of the world’s forests, shows that the pledge is underpinned by $19bn in public and private funds to invest in protecting and restoring forests.

According to a statement from the British prime minister’s office on behalf of the leaders, the Declaration on Forest and Land Use are expected to cover forests totalling more than 33 million square kilometres (13 million square miles).

While calling it an unprecedented agreement, Boris Johnson, who was the PM at the time said “We will have a chance to end humanity’s long history as nature’s conqueror, and instead become its custodian”.

As rousing and assuring as this may be, for many Nigerians, however, far-reaching concrete action will be needed to get them on board.

No comments to show.