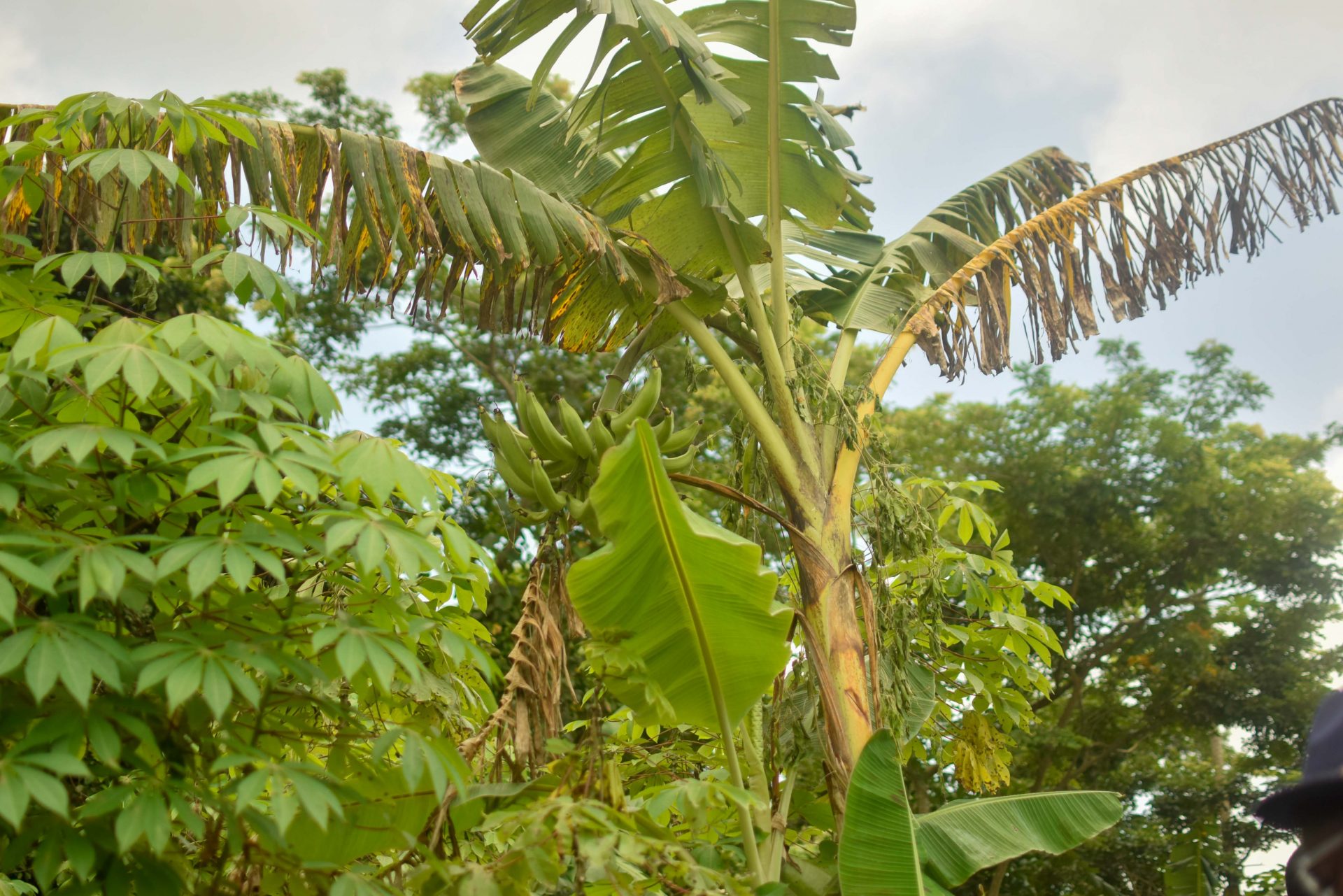 In keeping with the mission of Eco-Nai+ to report on the impact of climate change on the environment and its implications for livelihood and sustenance, we embarked on a field project to a farm in Nigeria where the impact is a growing concern.

In this report, Ijeoma Ilekanachi shares insightful encounters with farmers who bared their minds on the marked changes the farm has seen owing to climate change impact.  The Eco-Nai+ team embarked on a field tour of Agbeloba farms located in Abeokuta of Ogun State to examine the effects of climate change on agriculture.


A love of farming drawn from heritage, challenged by change

For Peter Olorunsheyi who grew up in a family of farmers, the idea of cultivating the soil for food is bliss. With the rising sun illuminating the morning sky, he makes his way to the farmland to check on the crops and workers. As a head farmer of Agbeloba farms, he knows the layout of the farm like the back of his palm, and while showing the reporter around, he moves with immense skill.

The 71-year-old regards this passion as a requirement for growth in agriculture. It has long been known that farming requires hard work, grit and commitment for good yield. However, one major setback is that sometimes the maximum effort put in can be hindered by environmental factors like the weather. He describes it as a shift in the normal working of things.

He put it plainly, “All those years ago, it was easy to predict when the rain would fall on crops which would help determine planting time and harvest time. However, now it’s harder to tell; it’s either we have too much rain or not enough rain”.

Agbeloba: A glide through nature’s bosom

The journey to this grassland involved entering the heart of Abeokuta in Ogun state. A small village and narrow bush path greeted the team as they made their way into the entrance of the farm which is marked by a well-constructed fence with the Agbeloba brand. Although the drive there seemed unnerving at first, with narrow bush paths, branches tapping the windows and rustling trees, the feeling later settled with that of marvel at the expanse of land.

Agbeloba derives its name from a Yoruba saying that means “the farmer is king”. The vast 33-acre farmland is home to at least ten crops and different livestock. It started with seven acres and went on to expand, now with customized boundary points to mark ownership. According to Mr Peter, Agbeloba farms were established in 2020, not only with the hope of improving food production but to integrate digital technology into agriculture.

According to the Chief of Operations for Agbeloba.ng, Kolade Yemisi, the platform aims to build a community of agropreneurs who support smallholder farmers to increase crop yield. The business boasts amazing return rates and near-perfect non-default on payments. 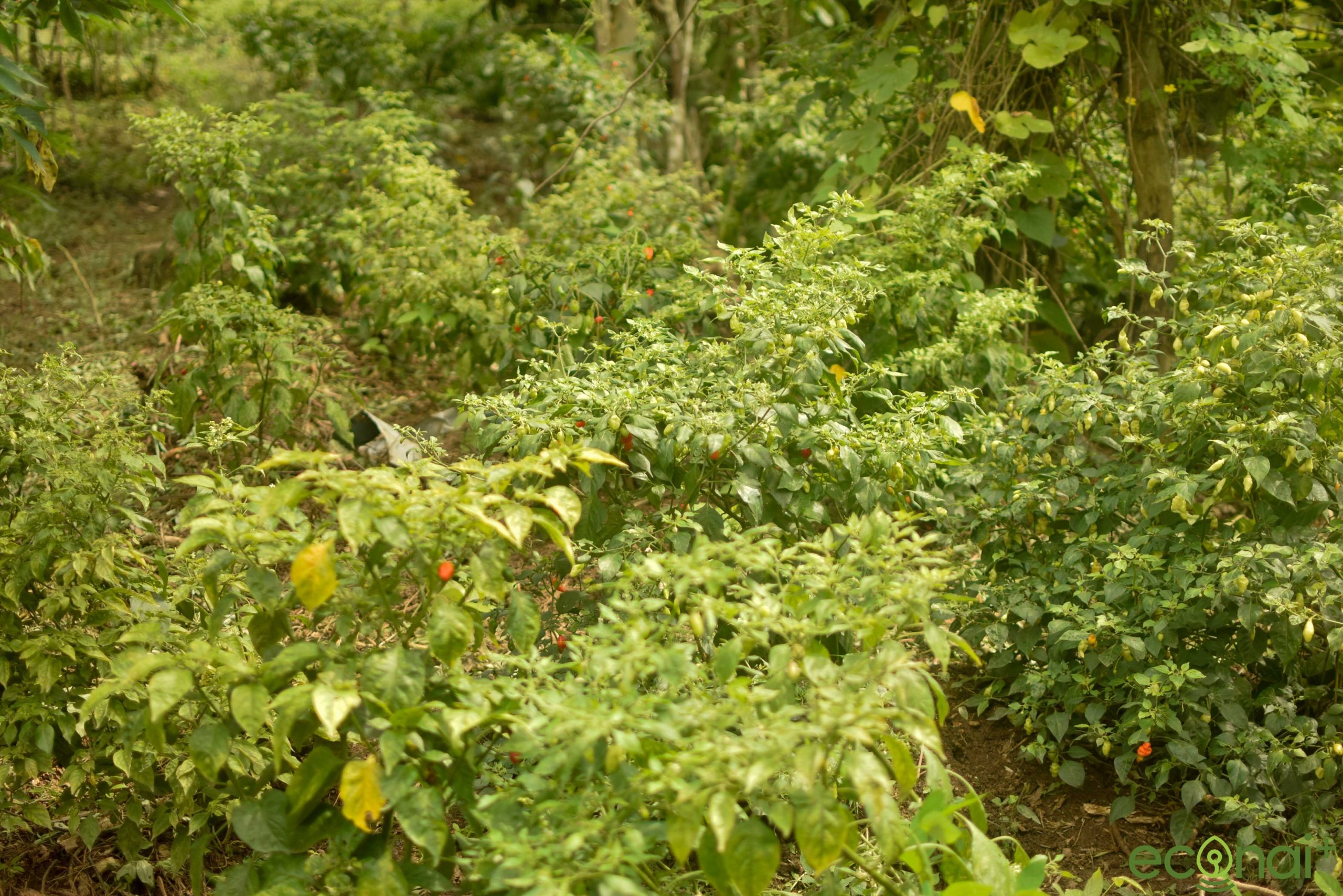 However, the cost of building such an innovative venture in Nigeria keeps rising, a dampener in this otherwise blissful story of disrupting agriculture. Added to the fact that the dwindling economy of Nigeria is heightening the cost of production, climate change also poses a severe threat to the regular output of farm produce for sale. Some studies have shown that issues like rising temperatures, drought, flooding and more frequent extreme weather events can ultimately hinder food and livestock production.

Speaking on the farm’s experiences with climate change, Mr Peter noted that the increase in temperature and scorching sun are some of the weather conditions that gravely affect the crops. Maize cobs are smaller in size, yams are not as big and other crops take later times to sprout.

With a disappointed nod, Mr Peter points to a yam plant that fell to the ground, stake and all. He explained that the yam is now a very difficult crop to cultivate with the yam farm accounting for only 2 acres on the whole farm.

“Yam is one of the most difficult crops to cultivate. Unlike other crops where you clear, heap and plant, yam requires planting when there’s no rain and mulching (covering the heaps with leaves to prevent decay) to protect it from the scorching sun”

“At their emergence level, you have to lead them to the stake you want them to climb. You find out that some leave the stake you put and start growing elsewhere. This is why monitoring the crops is necessary”

“Although the local programme of planting yam is okay. You are planting maybe around November, or December so that by August, or September you can make your first harvest which is called new yam. That same yam you harvested in August, we reproduce seed again in December. However, when there’s no balance in weather conditions, we can’t get good results.”

Looking on the bright side, he stated that the irrigation systems set on the farm have improved the growth of the yams. Another milestone achieved is that the farm no longer buys the yam seedlings but now produces seedlings even for sale. 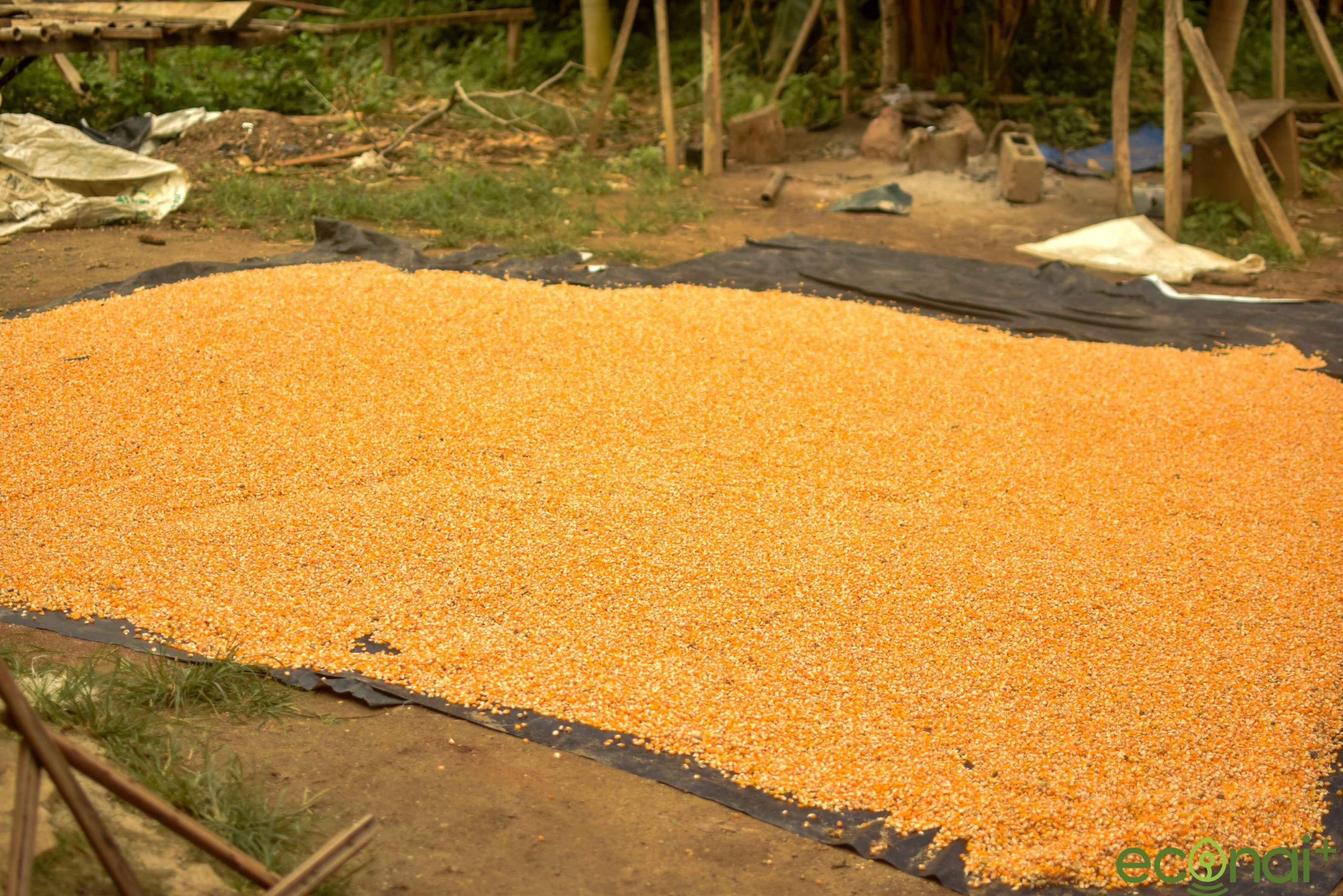 Threshed Corn left in the sun to dry

According to the Working Group II Report of the Intergovernmental Panel on Climate Change (IPCC), crop yield losses even after adaptations are projected to rise rapidly above 2°C global warmings. For food production, climate change impacts include up to a 5.8% mean reduction in maize productivity due to increased temperatures in Sub-Saharan Africa.

o his farmMr Peter corroborated this by saying, “I still want to argue that we cannot compare irrigation with rainfall. The rain will not only water the soil but regulate the temperature of the leaves.”

Pointing to the plantain plantation, Mr Peter revealed them to be giant size and noted that the mode of cultivation involves transplanting an already nursed sucker. This particular plantation is the most viable one on the whole farm with one tree sprouting as many as four different suckers.

“When you transplant the sucker during the rainy season, by the next rainy season between nine months to one year, they should start fruiting”, he said. Although the other plantations such as the cashew and banana looked very young at the time of the visit, he pointed out that they were doing well even though the rains stopped early last year.

Beaming with pride, the head farmer also showed the visitors the new pepper farm planted in early 2022. Both unripe and ripe pepper plants were already showing good signs of development. He recounted an event in a neighbour’s pepper farm which started way before Agbeloba’s but was later destroyed by the sun.

“If you visit that farm now, it has become a wasteland”, he said. 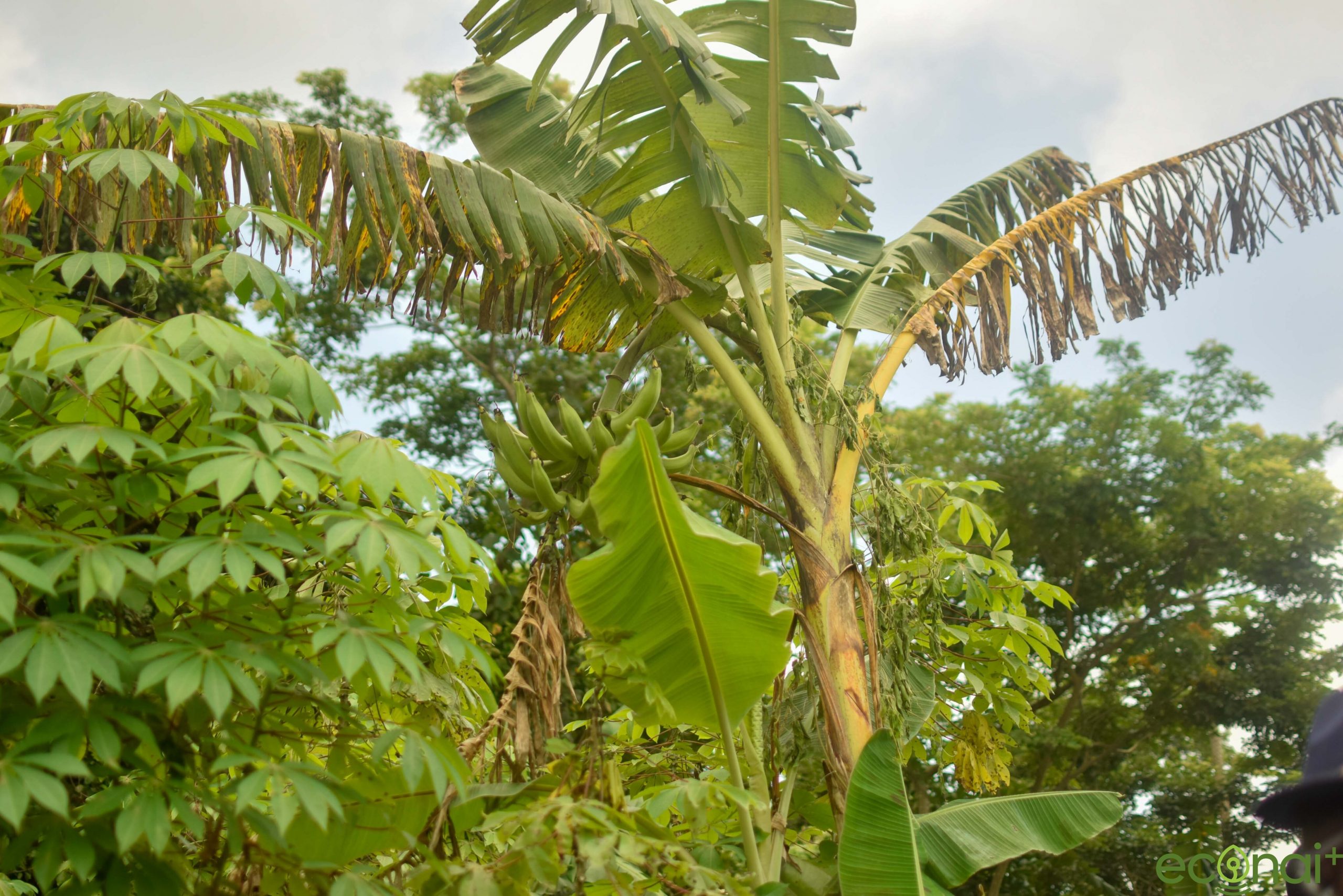 Fruits and vegetables also known as wild-harvested food plants are vulnerable to current and future climate changes. At Agbeloba, some of the fruits are not for commercial purposes and are mostly inherited from the land. One species of rare tangerine, the tangelo— a hybrid citrus fruit made by crossing a tangerine with a grapefruit— was seen. The snake tomato and walnut is also known as Àsálà in Yoruba were other food plants seen to be growing on the farm.

“Usually one chicken can produce one egg a day and we can realise four crates and a half. Even with the right feed, sometimes not all of them lay eggs”, he explained.  “We are hoping to expand and get more males”, Mr Peter added

An unmistakable stench after further trekking revealed that we had reached the piggery; the three females and one male pig strutting in their pens were bought in May. There were more pens than pigs because the animals give birth in the litter. Their dung is deposited in a hole in the soil for organic fertilizer. 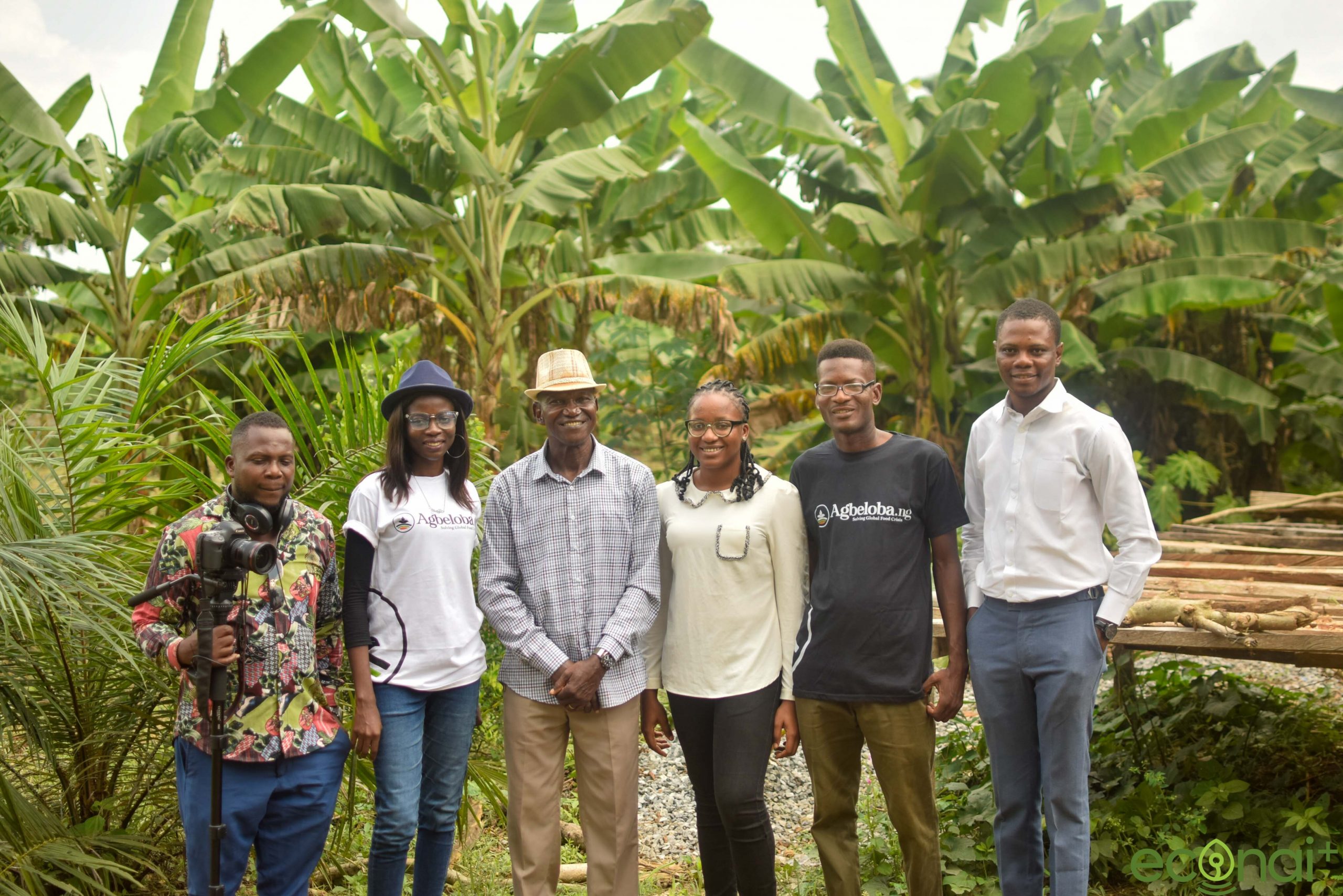 “We erected tanks for the pigs for them to drink and also for their baths as a means to combat heat”, we were told.

For the rabbit rearing, Mr Peter narrated that most of these rabbits died due to their fragile nature and were moved out of their houses to somewhere closer to the workers for monitoring.

“We have some of them around the farmhouse to monitor them. Some months ago, we lost some. We are trying to see what went wrong”, he said.

The catfish numbered about 675 excluding the ones already smoked and dried for sale.

A UN Climate change study states that for global temperatures to stabilise, carbon dioxide (CO2) emissions will need to reach net zero as early as 2050. To achieve this, new renewable energy options and lifestyles must be adopted. For agriculture, farmers have to amend their practices and be prepared for weather changes.

When asked about the interventions used to salvage the climate situation, Mr Peter explained that the irrigation systems and solar panels for electricity were a few of the steps taken already. The solar panels were placed on the roof of the farmhouse.

“It powers our inverter and subsequently, the farm. We also have a three kilowatts generator with a fuel capacity of 25 litres. The 2000 litre tanks are used to take care of our fishes in the pond, for the poultry birds and the pigs”, he stated.

The farm is cleared regularly to enable better practices and to get rid of weeds. “Especially during the rainy season, you’ll see more weeds than crops on the farm, so you have to ensure that these weeds don’t kill the crops”, he said. To prevent ozone layer damage, the farmers try to avoid bush burning as a means to clear the farm of weeds. They have made it a point of duty to educate themselves on the worsening effects of climate change. 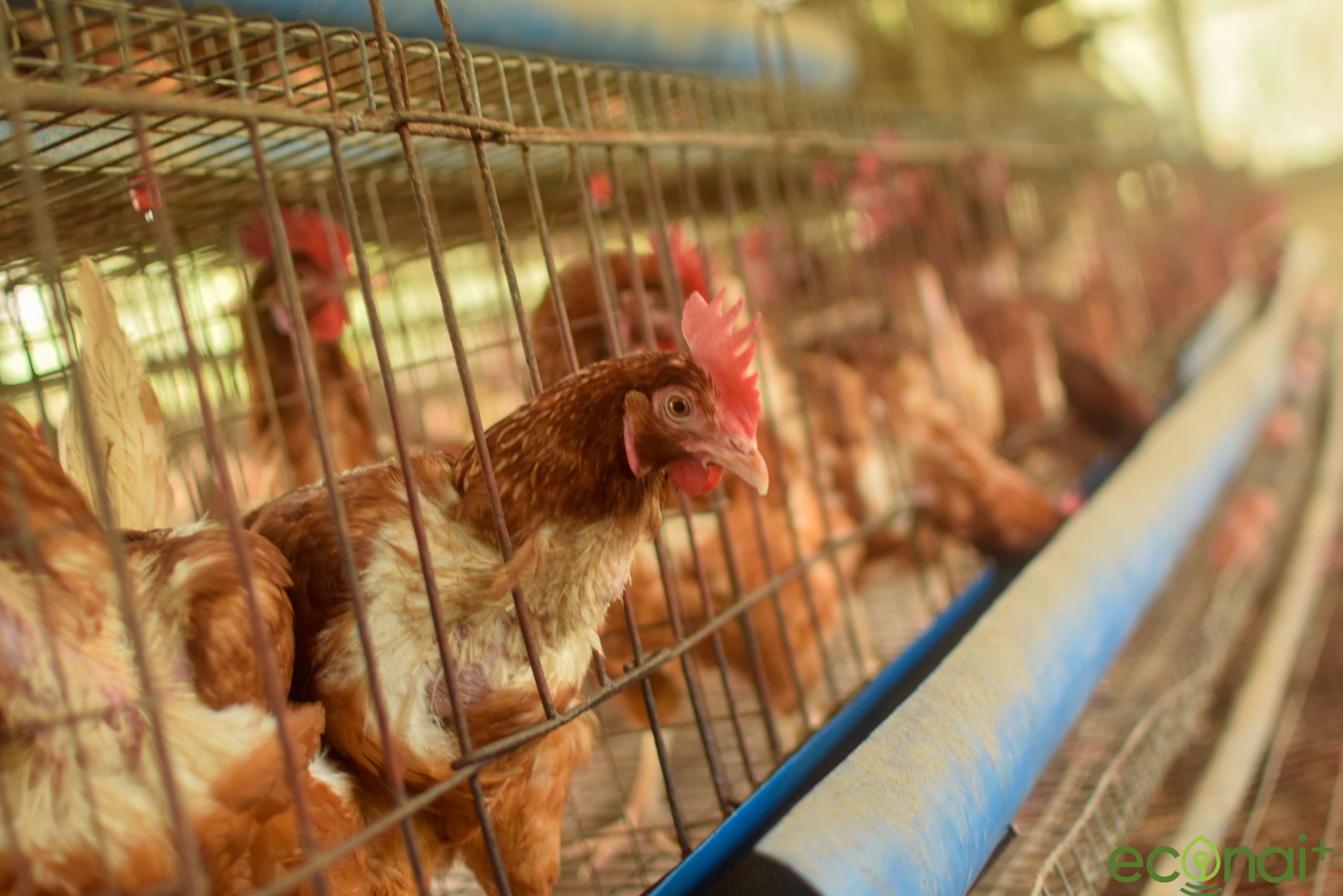 With planting styles such as transplanting and mulching, the crops can stand a chance against unpredicted change. Crops like cocoa, oil palm and yams have a higher chance of survival. In the aspect of business, the farmers sell raw produce or process other types of food with crops. There’s a garri processing plant, fish smoking machine and corn sheller(removes corn kernels off the cob) for this purpose.

Nigeria has an estimated population of 206.14 million people (2020) with an annual population growth rate of 2.5%. Nigeria’s population is projected to reach 262.9 and 401.3 million people in 2030 and 2050, respectively. With more mouths to feed in the coming years, innovative farming practices are needed to ensure food security.

Rotimi believes that if nothing is done about the emissions and frequent weather changes, agriculture in the whole country will suffer. When asked if the farm will be willing to partner with Eco-Nai+, he was elated about the idea.

“Of course, not just us, other farms suffer from this climate situation. We would want to partner with a platform that helps us track climate change”, he said.

Yemisi equally affirms that partnering with a digital platform like Eco-Nai + to track and report the impact of climate change will foster agricultural growth and food security.

The team was led by Dare Adekoya, Eco-Nai+ Data Analyst, while the audio-visual coverage was done by Oluwatosin Oladimeji, the multimedia lead.

SPECIAL REPORT… Privatization and failed promises —Inside the...

INVESTIGATION…. INSIDE OGONILAND: How a promised clean-up is...

No comments to show.